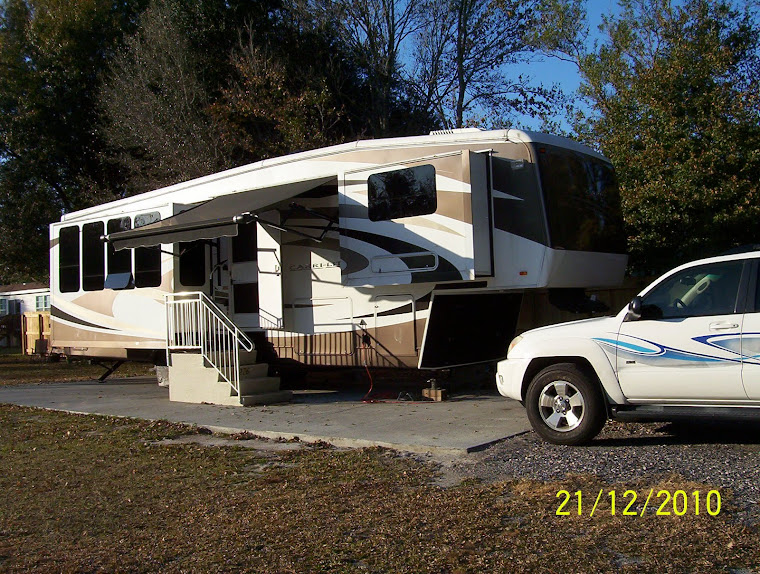 BEEN A LONG TIME SINCE I POSTED!!

Hope all is well. We have been busy, busy, busy!! Working towards retirement is a lot of preperation. well we only have a year left before we hit the road. then we will see how we do to become seasoned RV travelers. I haven't posted since Oct 2011. well a lot of updates to tell. I now have a new granddaughter Autumn she is 18 months. Lil Tony is 4 now and quite a handfull, but he says he"s Poppas best buddy! Our daughter just moved to Monteray California, so we will visit her some time when school is out to visit with our Grandaughter Malia( who is now 5). Getting ready for our company X-mas party so this is short until I get a chance to get back to my blog. Again MERRY X-MAS AND HAPPY NEW YEAR!!
Posted by THE BAUERS at 5:38 AM No comments: 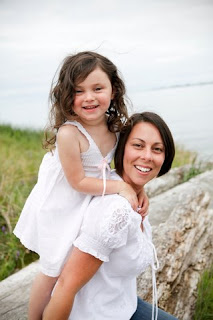 LOOK AT MY GIRLS!!
Well the trip to Gulfport lasted 1 day Tropical storm Lee kicked our butts! We had to leave pop-ups don't take to wind well!! Other than that a little updates are due. We are going to be grand parents again in May. We still have 2 years 10 months till retirement!!! our savings keep taking a beating. But we have paid off some more debt. Of course more to go. We are hoping my sister can come in December. She's gonna bring the pop-up and set up beside us. My daughter and grand-daughter are talking about also coming in December, could be a family reunion. Ed & I would like to try a Carrige rally in March at Brooksville, to see if we enjoy their rallys. Other wise workin along & quite busy often. Hope to have a small break in December.
Posted by THE BAUERS at 5:47 PM No comments:

Home today cleaning, and waiting for the window guy to replace our broken window. He just called and it will have to be done monday morning because a big black cloud is looming outside. Getting ready for a short trip to Gulf Shores Alabama. Going to meet my sister Jamie & her hubby Gerry with their pop-up camper for an over 50 retreat!! Gerry's cousin will be joining us too with their pop-up . Just 4-day get-a-way. We will be celebrating our 38th anniversary on the 1st of Sept. while we are there.
Grandsons 2nd birthday party this sunday at the local park. Grandpa will be giving boat rides on the lake. It's a pirate themed party. Bought lil "T" a cute short set with pirate stuff on it.
Posted by THE BAUERS at 1:38 PM No comments:

We had a whirlwind time with our daughter & grand-daughter. We arrived at noon and went straight over the Golden Gate bridge to Sausilito for lunch at a quaint italian resteraunt on the bay. Then stopped at the North end of the bridge at the overlook. What a great view of the bay & Alcatraz Island. Next day was a little rainy, but it stopped around 10:00am. So we took the granddaughter to a local park to play for awhile.Next was a trip to Muir Woods. Fabulous park!! Giant redwoods & sequoias, beautiful lake at end of trail. About 3 miles round trip. Then down to Ocean Beach to play in the tidepools. Next day: Dollar races at the horse track. $1entry $1beer $1 hot dogs $1sodas & $1bets!! Live band & horse racing! Spent 28$ and won 12$. Had a blast! Dancing, Betting, drinking!! Monday headed to Yosemite! Had to stop at Goodwill to purchase heavy coats because it was 30 up in mountains and had to borrow snow chains for the park or you couldn't enter. Stopped at 6000 feet to play in snow! was about 1' deep and coming down heavy. Made a snowman & had a snowball fight in the middle of a beautiful snow covered pristine meadow, not a sound except the snow plopping down from the tree branches!LOVELY! Got down to the valley floor and was back to around 57 degrees. hiked to the lower falls(1 mile round trip) went to the lodge, and checked out a couple more waterfalls. Around 3 pm left the valley for Oakhurst for a nights rest at the casino hotel.Very nice also!. Next morning went back into Yosemite, even more snow coming down! Got back to the valley and it was t-shirts & jean weather!More hiking, more waterfalls, deer, chipmunks, and even saw a brown bear! Now you know our knees are aching!!! Left Yosemite back into the snow & headed to my daughters apartment. Weds. Up and take the subway into downtown, grab a trolley and hit Fishermans Wharf first. Saw the sea lions at pier 39. Got on a double decker bus for a loop around city. Got off at Union Square and had lunch at the top of Macy's at the Cheescake Factory. Great viewpoint. Then back on the bus to Telegraph Hill. Forget it daughter our knees can only make it up one block!!!! Back on the bus to see ChinaTown, Most curvy road, city hall, Coit Tower, The painted ladies(victorian houses) & back to the docks. Then Home to die on the couch! Thurs. went to San Fransisco Zoo for the day. Friday went to Napa Valley, stopped at the castle for a wine tour, and then a few more winery's.Whew getting wore down. Saturday went to Tilmekin Park in Oakland, more hiking a picnic lunch & petting zoo, and carousel. Then dinner at our daughters Mother-in-laws.Sunday: off to 8-mile long Golden Gate Park. Walked through parks gardens and sat in the amphithearter for a band that was playing. Up the observation tower for a view of the city & bay. Back downstairs to an art gallery then back through the park. My legs are screaming at me to SIT DOWN!! Stopped to join in the Lindy in the park dance. Then back home again. Monday helped daughter pack up apartment. Tues. waited for the furniture guys to pick up rental furniture, turn in keys &  got some homemade ice cream at Fentons. Before we headed to a motel not far from Airport. Wed. morning kissed grand-baby & daughter goodbye they were driving back to Washington. We caught a shuttle to airport and headed home! I'm to tired to go on more latyer.
Posted by THE BAUERS at 6:52 PM No comments:

APRIL WAS MUCH BETTER!!

Got the Gazebo completed and the Lean-to also done! Weather is getting hotter fast.!! Got a lot going on at work for both of us. The new govener Rick Scott has messed with our pension plan. Now Ed has to pay in 3% of his salary to his pension.No problem with that at least we can afford it.But he also looses the 3% cost of living increase during our retirement years. And the drop program will no longer yield 6% but what ever is the current variable rate. (Also his insurance went up 5% and mine went up 3-1/2%) and no raise this year AGAIN.And when we retire as of right now no increases for cost of living, and insurance is adjusted by $400.00 per month.So basically Ed's pay will be about 5-6% less this year. And they are talking about averaging over the employee's history for the pension pay-out.I guess we keep rolling with the punches, but our plans have not changed yet we still will retire in 3 years!!! We paid off the boat last monday! WHOO-HOO!!:) Now to put the old boat payment into the 457b plan. We moved some money to a fixed income plan, and that will also contribute to our 457b. Getting ready to go to San Fransisco on friday to see our Baby-girl(Dannielle) and our grand-daughter(Malia).Matt (Son-in law) is back in Washington to open the Surf Shop for the season. Dannielle has a full itenarary for us. Yosemite, Muir Beach, downtown San Fran., Napa valley. WHEW! Were gonna need a vacation from our vacation!
Posted by THE BAUERS at 1:18 PM No comments: 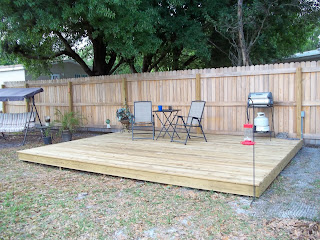 Well we got settled back in our coach. Gave her a wash down & repaired a few small things that needed it. Still got to do the roof & re-caulk, and condition the slides. And definitly a wax job!! Got the deck done & the lean to. The gazebo is up, and got a few little things to decorate in there and it will be done too. Still have fence to put up and the RV to get a good wash & wax. This is the 12X16 deck> And this is the start of the lean to. 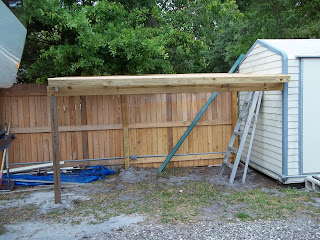 Well they found out what the burnt smell was! The transfer switch for the generator melted to an unrecognizable mess. Lucky it didn't burn down the coach!! The extended warranty wil cover it. It did take out the microwave & Water heater element. So that's covered too! I had a little bit of water showing up around my washer, that turned out to be a cracked drain pipe(also covered). My kitchen window came off the little crank tracks and they wanted 220.00 to fix it. NO WAY! I can do it myself. Some of the things they suggested we get done are re-seal the roof. Which we were planning on doing in April after we scrub her down. Has anyone re-sealed (caulked) their rubber roof? What type of caulk , clear silicone? What should I use to clean around the vents & a/c units? Any suggestions or tips are welcome.
Posted by THE BAUERS at 12:03 PM No comments: 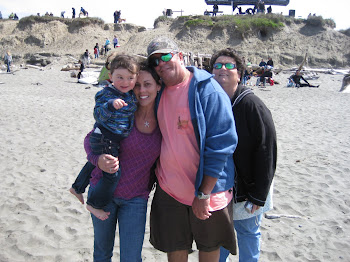